Chan Gailey's acclaimed 2007 recruiting class looks even more amazing in retrospect, now that we've learned Paul Johnson gets about the same results as Gailey got in his best years besides '07. Though Demaryius Thomas' early exit delivered the Georgia Tech Yellow Jackets more damage than any other single-player personnel move did in 2010, Derrick Morgan was still the best Jacket since Calvin Johnson and the best Tech pass rusher since Pat Swilling. 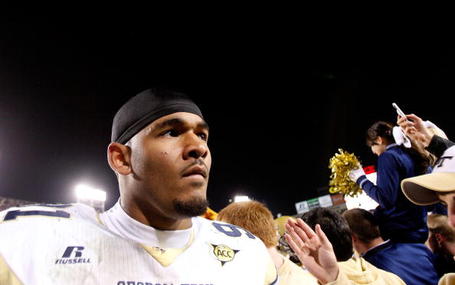 It's not often we talk about defensive players being clutch. It's easy to tell whether a quarterback steps up in big moments, or at least we think it is. But as the 2009 ACC Defensive Player of the Year and a first-team All-American, Morgan contributed clutch play after clutch play to Tech's best season in 20 years.

From his chasedown of Clemson QB Kyle Parker to seal the ACC title to his three-sack performances against those same Tigers and Wake Forest in crucial close games earlier in the season, Morgan was indispensable. His backfield disruptiveness even gave the Jackets one last chance in a tight loss to the Georgia Bulldogs and came inches short of snagging Ricky Stanzi and sustaining a rally against the Iowa Hawkeyes.

Drafted No. 16 by the Tennessee Titans, Morgan had to sit out most of his rookie year due to an ACL injury, but not before collecting 1.5 sacks in four appearances.