Share All sharing options for: Freddie Gilbert, Georgia Football: The Greatest No. 90 In Georgia Sports History

Who holds the Georgia Bulldogs all-time record for sacks in a single game? Since you're reading about Freddie Gilbert, you're probably not going to get this one wrong. The Griffin native harassed Temple Owls passers five times in one game in 1983. But guess who ranks second? Gilbert scored four sacks against the Florida Gators in 1984, tying him with three others for the honor.

A 1983 All-American and two-time All-SEC, Gilbert started four seasons that also happened to be the best four in UGA's 119-year history to this point. In 1980, he made a critical play against the Auburn Tigers that kept Georgia's championship hopes alive -- by the time he was done in Athens, he ranked second in career sacks with 26. 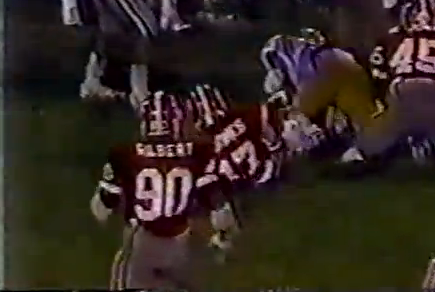 Gilbert became a teammate of fellow 1980 freshman Herschel Walker on the USFL's New Jersey Generals roster. He eventually made his way aboard the Denver Broncos and Phoenix Cardinals.