Tuesday night's game was the wildest baseball game I've ever watched, and it featured arguably the most controversial call in Major League history to end a game. Sure, there have been blown calls in games bigger than the one on Tuesday night, but perhaps none of those will be as revolutionary and game-changing as Jerry Meals' call was in the nineteenth inning.

Here it is, in live time:

And here is a picture: 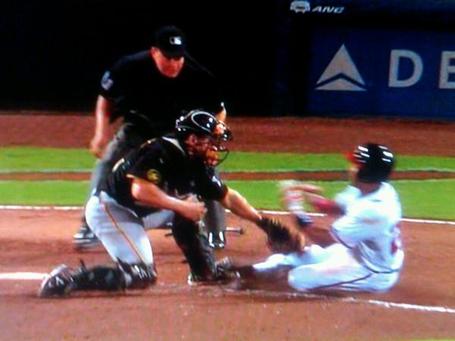 After many, many looks at various camera angles, Julio Lugo was indeed tagged out, though just barely. The tag barely grazed Lugo's right pant leg before touching the plate. It should have been the second out of the inning, but Meals called him safe and the game was over.

Watching the game live, I couldn't believe what had just transpired. The reaction was similar to when Jim Joyce ruined Armando Galarraga's perfect game last season.

Here was the umpire's explanation on the call:

"I just saw the glove sweep up. I didn't see the glove hit his leg."

I have a feeling this will be just the start of a lot of uproar surrounding the call. Will it finally bring instant replay to Major League Baseball? Who knows. But it is time to seriously consider it.

The Braves won their 60th game of the season with tonight's victory, which was the longest game in franchise history. The two teams will meet up once again Wednesday evening at 7:10EDT. It'll be Paul Maholm against Jair Jurrjens.

Pirates Vs. Braves: Offense Sputters Once Again In 5-2 Defeat