For the Florida Marlins fan, you'd think the worst thing about the Atlanta Braves would be taking Fredi Gonzalez and Dan Uggla for respective songs and always beating the Florida Marlins, but Braves fans used to (last month) complain a lot about those two gentlemen, so maybe Marlins fans just ignore all that. Last night, the Marlins TV broadcast sought to discover the most loathsome thing about the Braves. 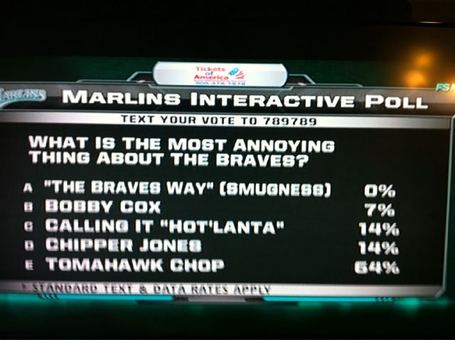 First of all, no actual Atlantan has called the city "Hotlanta" since Reconstruction. Ulysses S. Grant isn't the most popular man in Southeastern history, but his decree against "Hotlanta" was for our own good, and to this day you can spot road crews working to remove the irritant from highway shoulders as it gets blurted out car windows by radio station DJs who moved here nine minutes ago. It's like watching a ship get bailed out.

I've called it "Terminus" (once while stunting) more often than I've called it "Hotlanta" (never). It's like being sick and tired of hearing Miami's "Burger Time" nickname. If this poll were conducted in Georgia, C would win 89 percent to Chipper Jones' 11 percent, as certain churchgoing Georgians don't like him because he got divorced as a 26-year-old in 1966 [estimated].

Pleased to note #BravesSmug is as appreciated in Miami as it is throughout the rest of the country. You're welcome, Miami.