Brandon Beachy is not your typical pitcher. Just how special is he?

Share All sharing options for: Braves Pitcher Brandon Beachy Is A Freak (And That's A Good Thing)

Brandon Beachy is a freak. I mean that in the nicest, most appreciative way possible.

He was not a highly-regarded high school prospect, nor did he even make a Division 1 college program. The product of Indiana Wesleyan University didn't even place an emphasis on pitching in his collegiate career, as he played both first and third base more times than not.

Heck, he even contemplated ending his baseball career shortly before signing by the Braves.

A player with his baseball background should not be dominating Major League hitters as a 24-year-old. It just doesn't work that way. Yet somehow, someway, Beachy does it. And now he may just be the best starting pitcher in Atlanta's starting rotation.

Where does the success start from? His pitches, of course. And more specifically, his ability to elevate his pitches to achieve this success. Armed with various fastballs that sit around 92 miles per hour, a slider and curveball both capable of inducing awkward swings from the opposition, and a much improved changeup, Beachy uses all four pitches effectively on the mound. 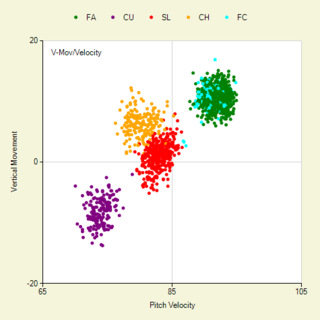 What does this chart mean? All of those colorful dots represent the average velocity and vertical movement of various pitches. While most pitchers find success in keeping their pitches down, Beachy actually elevates his fastballs (which are the green and teal colored dots) to record outs. That is highly uncommon and is typically a recipe for disaster with young pitchers.

So why is Beachy able to continually use the elevated fastball to his advantage? His breaking pitches. While it is possible to get away with an occasional ball up in the zone, hanging curveballs or sliders typically get hit into the outfield seats. As the graph indicates, the righty does an excellent job keeping his breaking balls -- especially his curveball, which is marked with purple dots -- down in the zone, and his slider has been his second-best pitch this season. He could stand to improve command on his changeup, but honestly, we're nitpicking at this point. All four of Beachy's pitches are excellent and he does an excellent job of locating them consistently and effectively.

While having all of the tools to pitch well accounts for something, actually performing while on the mound is obviously a key ingredient to continued success. Fortunately for the Braves, their starter passes the performance test with flying colors.

When you dig a little deeper, the statistics continue to impress. Despite falling just a few innings short of qualifying for the leader boards, Beachy would rank second in all of baseball in strikeouts-per-nine-innings-pitched since 2010. Only Brandon Morrow has been better. Beachy, who has the incredible K/9 ratio of 9.95, has been better than Tim Lincecum (9.66), Clayton Kershaw (9.57), and Justin Verlander (8.97), among others. While no one is arguing Beachy is the better pitcher than any of these aces, it is pretty remarkable to see his phenomenal ability to strike batters out in comparison to baseball's best.

The other aspect of his game that is so impressive is his ability to avoid walking batters. While many pitchers are able to strike opposing batters out, their ultimate downfall comes with the bevy of free passes they allow. Beachy does not do that; in his 23 starts, his BB/9 ratio is a phenomenal 2.71. For a 24-year old pitcher who strikes out so many batters at such a high frequency, his ability to limit his walks is remarkable.

Will Beachy's stellar performances continue on the mound for years to come? Quite possibly. The numbers indicate there is a good chance of it happening. While injuries could always derail a player's career, one would have to be inclined to bet on the kid's future.

The Braves should be thrilled to have a pitcher of his caliber in their starting staff. For a guy who was pitching for Indiana Wesleyan University just 36 months ago, it is pretty crazy to consider Brandon Beachy's ascension to Major League dominance. Freaky, even.