Baseball is finally back, baby.

What seemed like an eternity since the Atlanta Braves made the final out against the Phillies is now in the past and fans can only look towards the upcoming season now. Which players emerge like Freddie Freeman did last season? Which players succumb to injuries for most of the year as Jason Heyward did? Do guys like Mike Minor, Julio Teheran and Arodys Vizcaino break out in 2012? We'll know the answers to these questions and more in the near future.

On Sunday morning, Braves pitchers and catchers reported to Orlando for the first official team meet and to get a little work in. Many members from the roster showed up a few days early, most notably Jason Heyward and Chipper Jones. We have tweet updates, photos and some newsworthy bits after the page jump...

Heyward dropped about 20 pounds in the offseason and is dedicated to regaining the swing he terrorized the National League with as a rookie in 2010. J-Hey looked to be in great shape while taking batting practice and doing some fielding this morning in Florida. Here are two photos, courtesy of David O'Brien and the AJC Twitter. 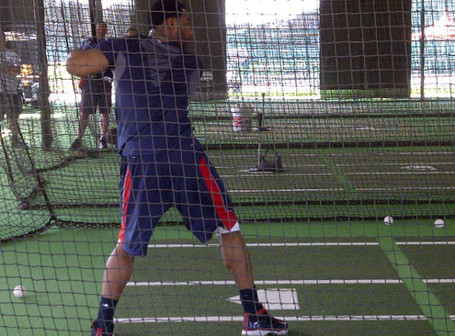 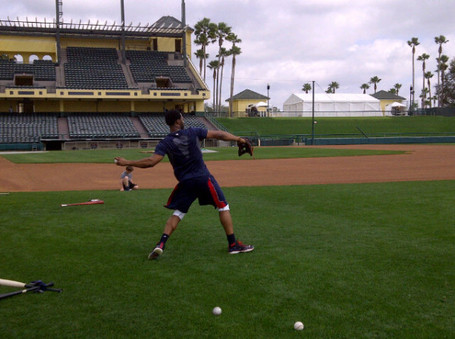 Where does one go should they be interested in acquiring similar calf muscles to those that J-Hey has?

Chipper Jones has never been a player to shy away from extra work and the veteran third baseman was in Orlando this morning along with his seven-year old son, Shea. You never know if this will be the final Spring Training for old No. 10. 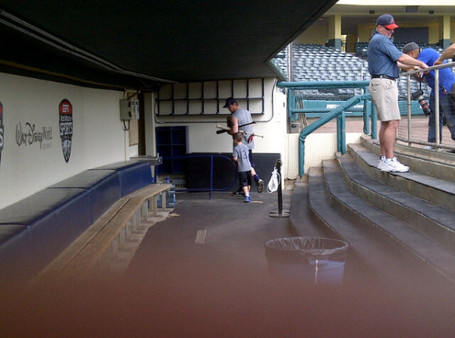 David Ross, who has to be one of the better characters in all of baseball, had a great quote about showing up to camp in shape.

#Braves DRoss is bigger: "Last year I was trying to get skinny like everybody else. I looked good, but I'd rather hit the ball in the trees"

There will be plenty of updates this week from Spring Training as more and more players begin to report. Monday is the first official team workout, Friday is the deadline for players invited to camp to report. The first game is scheduled for March 3 as Atlanta will take on the Tigers.

For more on the team, head on over to Talking Chop.