One of the biggest stories every year when players report to Spring Training is the shape they arrive in. While most players use the offseason to recover from any injuries and get in the weight room, others do not always have such a work ethic. With just about every member of the Braves already in Florida, we have received a few updates on various players.

Two of the more notable guys this year were Chipper Jones and Dan Uggla. We have an update on both (and others) after the jump...

Chipper has gone through it all as a professional baseball player and is one of the older guys in the league. Is he likely to be a little out of shape entering Spring Training? Probably. This picture suggests the veteran third baseman may have added a few pounds, though. 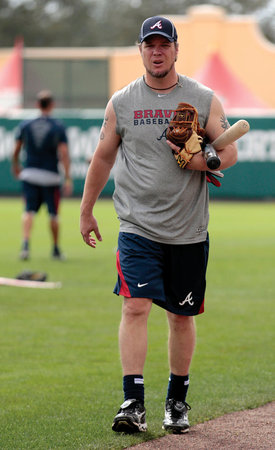 Jones has always been in great shape and this is probably just a bad picture, but it is pretty funny. That is such a Chipper Jones picture above.

Jason Heyward showed up to camp after losing 20 pounds and added lean muscle in the offseason. David O'Brien of the AJC continued to rave about the shape J-Hey is in, especially as he attempts to avoid injuries in 2012.

Perhaps there's been a more fit or impressively built ballplayer than Jason Heyward on teams I've covered, but I can't think of one. #Braves

Dan Uggla has always been ridiculously strong for a man of his size and the slugging second baseman arrived at camp even bigger than last season. Check this tweet out:

Meanwhile, #Braves 2B Dan Uggla, who already had Popeye arms, has even larger guns now after adding about 20 lbs through heavier lifting.

There is a good chance Uggla will drop some weight (and lose a bit of muscle) in both Spring Training and in the regular season due to the daily grind of games, but it is encouraging to hear the 33-year old is keeping himself in great shape.

A leaner #Braves OF Matt Diaz reported today, having dropped weight after feeling too bulked up in his homerless '11 season.

Good stuff all around. All players are typically feeling pretty well this time of year, but it's great to see the Braves have accumulated a group of players serious about staying in good shape even during the offseason.