Share All sharing options for: Braves Vs. Phillies In Rain Delay, Time Unknown For First Pitch

The tarps are on the field in Philadelphia, and the start of the Phillies vs. Braves game will be delayed due to a threat of rain storms in the area. There are some dark clouds hovering over the stadium and the fans at Citizen's Bank Ballpark are being asked to leave their seats and take cover in the concourse.

There has been lightning in the area and there is also a threat of a hail storm hitting in Philadelphia. There is a 50 percent chance of rain through the 9 p.m. ET hour, ad the chances of rain greatly increase around 10 p.m. ET.

Here is the current radar map of the Philadelphia area as of 7:30 p.m. ET, and the storm is heading Southeast and right through Philadelphia: 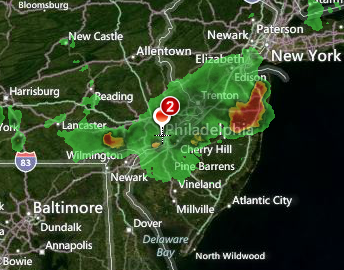 Currently there is no expected timeframe for when the game will begin.

For more on the Atlanta Braves head over to Talking Chop. Philadelphia Phillies info can be found over at The Good Phight. For more Major League Baseball news and notes head over to Baseball Nation.