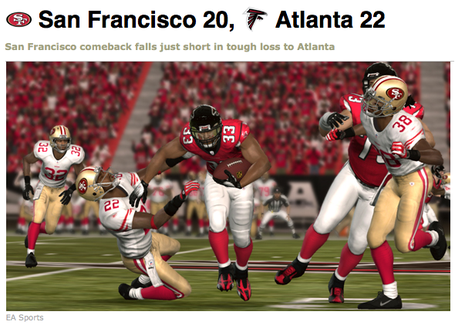 The 49ers already fired their offensive coordinator. Is Mike Singletary next in line to collect unemployment? Maybe so, if he doesn't straighten things out in San Francisco, and it doesn't get any easier for the 49ers this week as they face the red-hot Falcons. According to the "Madden" simulation, the Falcons take a 22-10 lead into the fourth quarter, then watch as the 49ers score 10 straight points to get within two. It's a Crabtree fumble in the final minutes, however, that ends any comeback hopes for San Francisco, dropping them to a miserable 0-4 record to start the season.

This makes yet another prediction to go in the Falcons favor - albeit with a bizarre 22 points. If there's an expert predicting the 49ers, I've yet to find it. Madden simulations correctly predicted the Week 3 winners at a 66% clip.