Via the official site: 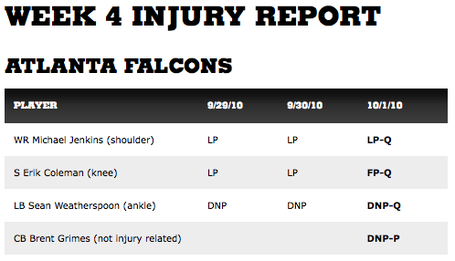 Jenkins was listed as "Limited Participation-Questionable" last week too and ended up not playing. It's anybody's guess if we'll see him out there or not on Sunday. They could hold him out this week and then let him get his legs underneath him against the Browns in Week 5. They really don't need him until Week 6 when the Falcons travel to the Linc to play Michael Vick and the Philadelphia Eagles.

I expect to see Coleman out there after fully participating in Friday's practice. I think it will be more of a timeshare with William Moore though. Moore has shown he can make plays and his talent is too great to be used only sparingly.

The biggest worry is with Weatherspoon. Every Falcons fan held their collective breath when he left on a cart during the Saints victory but he relayed via Twitter that all was fine. That's obviously not the case and three straight days of not practicing likely means Stephen Nicholas will get the call from the bullpen.