Should Dunta Robinson Be Suspended For 'Dirty Hit' On DeSean Jackson? Here's A State-By-State Poll

Share All sharing options for: Should Dunta Robinson Be Suspended For 'Dirty Hit' On DeSean Jackson? Here's A State-By-State Poll

Dunta Robinson's explosive shot to DeSean Jackson's chest, coupled with James Harrison's beheadings of Joshua Cribbs and former Bulldog Mohamed Massaquoi, has re-invigorated the national debate on what to do about helmet-to-hemlet hits in the NFL.

Was Robinson's hit a dirty hit?

ESPN's SportsNation has opened the floor, and America has spoken: 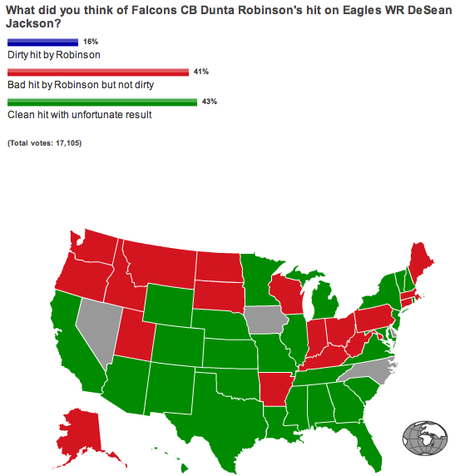 So looking at just the Midwest, Southwest, and Rocky Mountain states, what do we see here?