Roddy White Is A Symbol Of The Atlanta Falcons

Share All sharing options for: Roddy White Is A Symbol Of The Atlanta Falcons 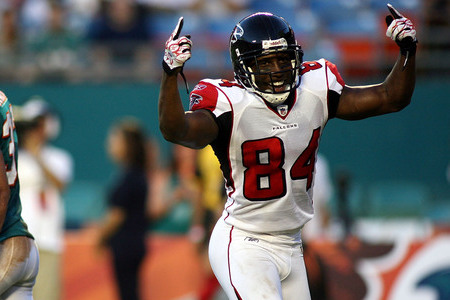 Think back to that god awful time in 2007 can you think of anything good to come out of that season? To be honest we were so mad and angry at the world we couldn't care that the young Roddy White was developing before our eye's.

"I watch the Falcons all the time. I'm going to be pretty set when I get there."

White was drafted out of Alabama at Birmingham in the first round as the sixth receiver taken. Coming to Atlanta there was a giant need for a legitimate number one receiver. For years the Falcons had gone by with a combination of a stout run-game and the Michael Vick Experience, but still something was lacking in the receiver department.

"At that point I thought my NFL career was over."

The first two years were torture. Not just for Roddy but for us fans. Remember that one time Roddy dropped a wide open touchdown catch? "One Time?!" you scream in reply, "How about the Giants game, Saints game..." and on you go into the night reminiscing about all the hair you lost over the frustration he caused.

Time and time again we would call White a bust, flop, quitter, useless talent and so many other more offensive things that cannot be transcribed at present. As White lost confidence so to did the team. At the end of his second year (2006) the Falcons had compiled a 7-9 record, fired their head coach and were on the downturn as a franchise.

We never gave the man any credit for being such a hard worker. Why is this? Because the year 2007 presented itself before Falcons fans and the transformation of the White was never given an ounce of attention as he rightly should have.

As Michael Vick lied and Bobby Petrino quit, Roddy White was working hard. Every day, every snap the guy was working. At the end of arguably the worst season in Falcons franchise history White put up stellar numbers no one would've predicted.

83 receptions, 1,202 yards and 6 touchdowns are numbers we never could've imagined possible from White . The amazing thing about this was that he did it with several mediocre quarterbacks and an overall terrible team of misfits. As Bobby Petrino betrayed the organisation, Joe Horn was teaching Roddy to grow up.

"Playing with Joe was the best thing to ever happen to me," White said in an interview with Pat Yaskinskas of ESPN.com. "He's the one who made me realize what's expected of you if you're going to be a good pro. He's the one who taught me that you have to prepare mentally every day and you have to go out and practice hard every day."

While Sharod was developing so to was the team. Atlanta had the number 3 overall pick in the 2008 draft and they selected Matt Ryan out of Boston College.

After years of mediocre passes coming his way, White finally had a quarterback who at the very least was a competent leader and worker. Not only that but the team was trying to win back its fanbase and what better way to do it than winning 11 games.

"When you do that, you’re both sort of volunteering ways to get better.’’

Once thought of a bust and selfish player, both White and the Falcons worked hard to become relevant in the NFL. As Troy pointed out, White is an elite receiver. I wouldn't be surprised to see the team classed elite in the near future. With players like Michael Turner, Matt Ryan, Curtis Lofton and Thomas DeCoud, there is a sense of maturation going on.

"It's hard to find a guy that will share information with you when we're all competing for jobs," White said with Yaskinskas. "But Joe did that with me and now I try to do it with Harry Douglas. I look at Harry like my little brother, but I also look at him as what I used to be before Joe cam along. I'm always on Harry about working hard every day."

As White matured in a hurry so to did this team. Matt Ryan, Roddy White, Curtis Lofton and Dunta Robinson all are 28 and younger. That's a lot of youthful leaders for a promising team. As one player emerges so to will others, this Falcons team is one to like for years to come.

"The sky really is the limit for this team"

Roddy White's words have painted the picture from start to finish. As Roddy developed so to did the Falcons. Both he and the organisation were at the bottom of the pile looking for some way to get out. His dedication and accountability to himself as well as the organisation is what astounds me about Roddy White. Sometimes as fans we tend to overlook things and be stuck in the present and looking to the future.

This team has the pieces in place to get to the top of the pile. The sky truly is the limit. For Roddy White and the team.

But when we look back remember this: Roddy White will be one of the greatest Falcons receiver to play the game. Not necesserily for his statistics, or win-loss record, but for his heart, desire, and respect for the game.