The latest Madden NFL 11 simulation, if it turns out to be true, would cool down the extremely hot burner under Mike Mularkey's seat. The EA Sports digital sorcerers predict a five touchdown explosion and a 35-28 victory over the Cincinnati Bengals on Sunday. The Falcons have scored five touchdowns only once this season - during a 41-7 rout of the Arizona Cardinals in Week 2. In the simulation, the Falcons (SPOILER) got off to a slow start.

The Cincinnati defense looked fierce in the first quarter, shutting out the Falcons while picking off Matt Ryan on his first two pass attempts. But then Atlanta completely changes the game, scoring 28 points in the second and third quarters alone, including two touchdown bombs to Roddy White to beat the Bengals 35-28.

Player of the Game: Roddy White 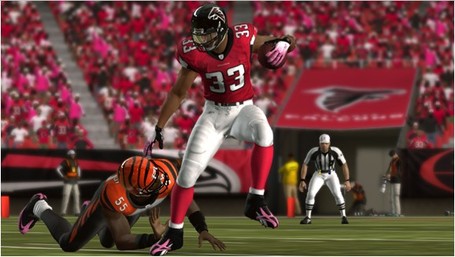 Carson Palmer is intercepted twice and though it doesn't say it, don't you get the feeling at least one of those was by William Moore? Cedric Benson is shut down and held to 3.6 yards per rush. Not only that but his longest rush of the game was six yards. Longest rush. Six yards. We are the '85 Chicago Bears! Terrell Owens led the Bengals with 125 yards - including a 65-yarder - on six catches and one touchdown. Okay, I take back that last statement about the '85 Bears. We don't see how Chad Ochocinco did but I'm certain it was close to what he always does when he runs his yap.

Matt Ryan was a solid 19-for-28 for 255 yards and two touchdowns. He did throw two interceptions, on his first two passes, but then settled down to run his Georgia Dome record to 16-1. Michael Turner, my fantasy start of the week, rushed for 102 yards on 22 carries and score twice. Cha-ching! And last but certainly not least, Roddy White backed up his prediction with eight catches for 123 yards and two touchdowns.

The Madden prediction engine was only 50% at predicting the Week 6 games so I wouldn't bet your mortgage check on this or anything. Still, the last time the Falcons lost a game in which their offense was disappointing, they hung 41 at home the following week. In the words of Jason Kirk, I'm not saying. I'm just saying.