Last week, the Madden Simulation predicted a two-point win for the Falcons over the 49ers and I mocked it's video game naivete. This is my apology. Never again will I doubt the all-knowing EA Sports engine. If it warns me of a close game against a winless team, I will listen.

Now, on to this week's sim. 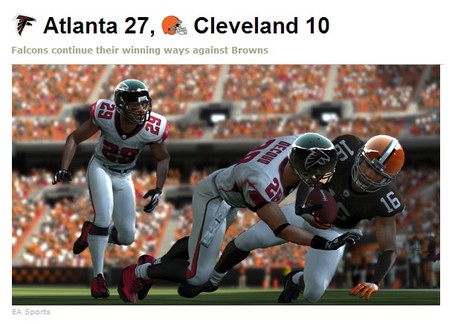 The analysis via ESPN and EA Sports:

The Falcons are one of the hottest teams in the NFL right now, and they capitalize on their momentum to beat up on the Browns, 27-10. Matt Ryan threw for 254 yards and two touchdowns, while Michael Turner added 169 yards -- including an 85-yard touchdown run in the fourth quarter -- that helped put the game away for Atlanta.