Atlanta Falcons great* Deion Sanders, currently working on NFL Network's pregame show while sporting a black suit, red tie, and Falcons pin, will enter the team's Ring of Honor tonight. He played five seasons in Atlanta, going to three Pro Bowls, earning two All-Pro team memberships, and running back a punt for a touchdown in his first NFL game. Among other things.

Here's a preview from earlier today of what his banner will look like when raised at halftime, via Jay Adams. It'll go up alongside to Mr. Falcon himself, LB Tommy Nobis, meaning the best player to ever play for the Falcons will be honored right next to the greatest-ever Falcon. There's a distinction: 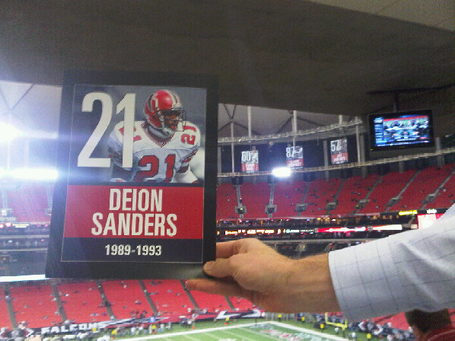