When the Atlanta Falcons took a 10-0 lead shortly before the half, Baltimore Ravens fans were probably saying things like, "We're beating ourselves out there!" because that's the kind of thing sports fans always say. Because no team has ever been beaten by its opponent without assistance. You know what, Ravens fans? NFL Network agrees: 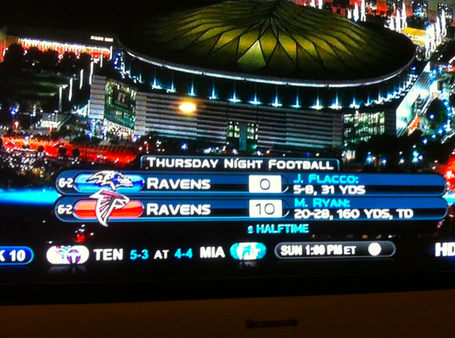 We get the confusion. Same record, pretty much the same mascot and quarterback, The Wire and The Walking Dead being equally great (COUGHNOCOUGH) -- these teams are easy to mix up.

And with this being the network's first live game broadcast of the year, you'd expect a few hiccups. You'd also expect Joe Theismann and company to know the names of NFL players -- so far they've messed up Matt Ryan, Joe Flacco, Vance Walker, and Brent Grimes at one point or another. We'll knock the rust off in time for next week's Miami Dolphins-Chicago Bears Super Bowl preview, y'all!