Photo Of The Week: Roddy White Celebrating With Ring Of Honor Banners In The Background

Share All sharing options for: Photo Of The Week: Roddy White Celebrating With Ring Of Honor Banners In The Background

Atlanta Falcons WR Roddy White was already the team's hands-down breadwinner even before catching last night's game-winning touchdown against the Baltimore Ravens. He'd been named the team's MVP for the first quarter of the season and midseason offensive player of the year by Sports Illustrated, has led or been in the top two in catches and receiving yardage for just about the entire season, talked big and backed it up against the Cincinnati Bengals, and forced a game-saving fumble against the San Francisco 49ers.

Last night we found out what Roddy White is made of. After dropping two very easy passes in critical situations -- his first two drops of the season, mind you -- he caught twice for 48 yards on the game-winning drive. Michael Jenkins made a very difficult fingertips catch, the offensive line gave Matt Ryan time to make sharp throws, and Tony Gonzalez forced a clock-preserving pass interference call, but this drive went just like this Falcons season. With Roddy White deserving and getting the spotlight.

Deion Sanders was inducted into the team's Ring of Honor last night, with a banner featuring his name and image raised to the Georgia Dome's rafters. In this photo, you can see all eight banners in the background, almost surrounding White's smiling face. It's not out of line to say that if he keeps this up, No. 84 will join No. 21 and the others some day. 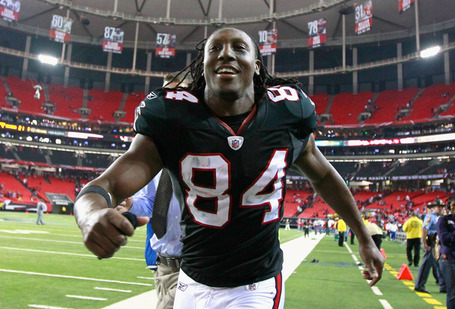