Roddy White, NFL Parity, And The Larry Drew Curfew: Around The Perimeter

Share All sharing options for: Roddy White, NFL Parity, And The Larry Drew Curfew: Around The Perimeter

Falcons: Atlanta Falcons WR Roddy White and TE Tony Gonzalez are the leading NFC vote-getters at their positions. White's status there should go without saying, but you never know with Falcons players. As long as national media keeps singing his praises, his run for very deserved postseason awards is in good shape.

Hawks: Atlanta Hawks coach Larry Drew thinks his men must be out carousin' too late on nights before games. Something's got to explain three years of sporadic effort. Sounds like Drew needs to get in touch with his inner NORM VAN BROCKLIN. In addition to railing against Communists, journalists, and football players, former Falcons coach Van Brocklin constantly warned his players about spending too much time "whoring on Peachtree." 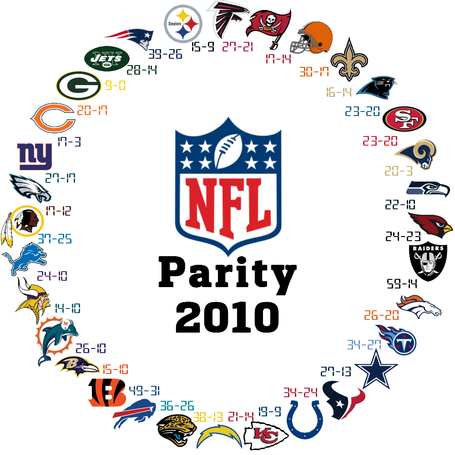 Each team beat the next clockwise team this season. The Pittsburgh Steelers beat the Falcons 15-9, who beat the Tampa Bay Buccaneers 27-21, who beat the Cleveland Browns 17-14, and so on. This image is the best response to but-my-team-beat-that-team power rankings complaints, but it's also proof that the NFL works the way the suits want it to, on a weekly basis at least.