Packers Vs. Falcons Madden NFL 11 Simulation: Both Offenses Move The Ball But Points Are Hard To Come By

Share All sharing options for: Packers Vs. Falcons Madden NFL 11 Simulation: Both Offenses Move The Ball But Points Are Hard To Come By

In the biggest game of Week 12, we know what the flesh and blood experts think about the outcome of Packers vs. Falcons but what does the simulation engine of Madden NFL 11 predict will happen? The Madden prediction engine went three-for-three predicting the Thanksgiving day games, even predicting a three-point win for the New Orleans Saints but now we'll find out what the Falcons digital chances are.


While many experts predicted big things for the Green Bay Packers this season, it's the Atlanta Falcons who are the surprise of the NFC, sitting on top with a record of 8-2. Make that 9-2 after this week, as according to "Madden" the Falcons get 334 yards passing from Matt Ryan, 136 yards rushing from Michael Turner, and 154 yards receiving from Roddy White to beat the Packers, 17-10.

Player of the Game: Roddy White 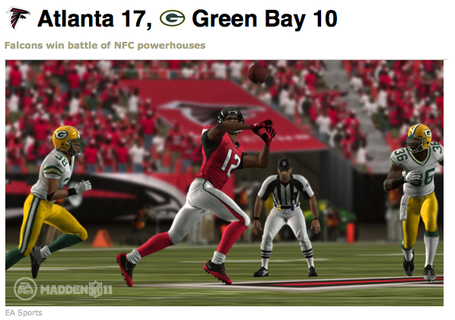 The Falcons roll up a lot of yards but only 17 points in a seven-point win over the popular pre-season NFC favorite, Packers. Matt Ryan outduels Aaron Rodgers, throwing for 334 yards on 26-for-41 passing and one touchdown to Roddy White. White continues his record-breaking season with 10 catches for 154 yards and one score. The ground game had no trouble either with Michael Turner gaining 136 yards on 20 carries and one touchdown. Both White and Turner had plays of over 50 yards. Turner's was a 64-yard run and White caught a 59-yard pass from Ryan.

The Packers were led by Rodgers' 288 yards passing and one touchdown but it was the ground game that couldn't get going against one of the top defenses in the league. Brandon Jackson managed only 54 yards on 15 carries but Greg Jennings was a bright spot in the passing game, catching eight passes for 91 yards and one score.

I would not expect a 17-10 game with these two offenses but I'd certainly take it. The Falcons are tied for the league lead with five wins this season by less than one score. They win the close ones and I expect this one to be close. Call it 31-27, Falcons.