The Madden simulation is one of my favorite things during a game week. I can remember running my own simulations on the Sega Genesis and a copy of Madden NFL 94. I'd set the appropriate matchup, check the weather reports, adjust for any injuries and then let Madden and it's digital know-it-alls sim the results. At the conclusion of the game, I'd copy the game stats down and would take comfort in knowing that I had some inside knowledge as to the results of the upcoming game. Yes, I'm a nerd. Let's move along now.

Flash forward to today and the Madden engine is not much better at predicting the results of an actual NFL game, but it's still every bit as fun. This season, Madden is 4-3 picking the Falcons' games but has nailed two games exactly. The team at EA Sports predicted a two-point win over the 49ers and a seven-point win over the Bengals. Impressive. What do they think the outcome will be when the Falcons play the best team in the NFC?

How many people had Tampa Bay and Atlanta in first place at this point in the season? Both teams have exceeded expectations so far, and in a battle for the division lead in the NFC South, it's Atlanta that comes out on top, 28-16. Matt Ryan leads the way for the Falcons, throwing three touchdown passes, including a 10-yard score to Roddy White that seals the game for Atlanta. 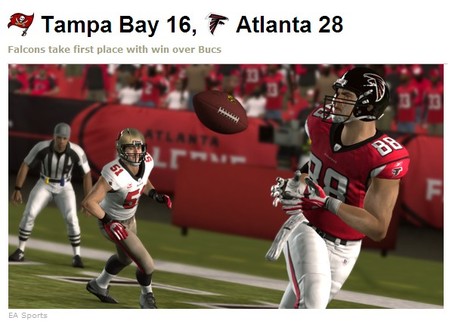 The Falcons score two first quarter touchdowns and lead 14-6 after the first quarter. A quiet second quarter gives way to a 17-point third quarter that finds the Falcons with a five-point lead heading into the final stanza. Matt Ryan to Roddy White ends the Buccaneers day and forces the NFL to ask, "which team is the best in the NFC?"

Matt Ryan throws for 257 yards and three touchdowns. He completes 24 of 41 passes and throws one interception. Michael Turner rolls up 112 yards on 20 carries against the Buccaneers sorry rush defense and adds a touchdown for good measure. Of course, Roddy White would be heard from. He catches seven passes for 100 yards and two scores, including the fourth quarter grab that put the final nail in the coffin. We can tell from the image above that Tony Gonzalez was the recipient of one of Ryan's touchdowns as well.

Josh Freeman threw for 225 yards and one touchdown but did throw an interception. I hope it was to Dunta Robinson. He hasn't had an interception in 26 games. That's overdue. LeGarrette Blount managed only 73 yards rushing against the sixth-rated run defense in the league. Mike Williams caught five balls for 71 yards and scored the Buccaneers only touchdown.

A 12-point win for the Falcons would make a lot of bettors happy and it seems like the right number. The Buccaneers have beaten the teams they should beat but have been destroyed by the good teams. The Falcons are one of those good teams.