"Michael Turner runs wild in win over Panthers." That's the headline for this week's Madden NFL 11 simulation of the Week 14 NFC South showdown between the Atlanta Falcons and Carolina Panthers. In the sim, the Falcons never trailed and coasted to an easy victory. Don't just take my word for it, here's the official synopsis from the boys and girls ate ESPN and EA Sports.

Despite the 10-2 start, there are still plenty of non-believers when it comes to the Atlanta Falcons. Michael Turner is here this week to make you believe as the back rushes for 137 yards and one touchdown in Atlanta's 27-14 victory over Carolina. Matty Ice adds 273 yards and two touchdowns through the air to help the Falcons maintain their lead in the hotly-contested NFC South. 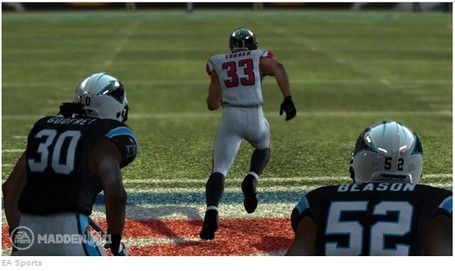 It was a good day to be a key member of the Falcons' offense. Matt Ryan delivered an efficient 22 of 31 passing day for 273 yards and two scores. Turner, our MVP for the day, rolled up 137 yards on the ground on 20 carries and one touchdown. Roddy White found all kids of room with eight catches for 91 yards and hauled in one of Ryan's passing touchdowns.

For the Panthers, it was more of what they've been doing all season. Jimmy Clausen threw for only 183 yards on 17-for-30 passing and had one pick. He also threw a touchdown to Steve Smith, who finished with four catches for 59 yards. Jonathan Stewart carved up the Falcons for 102 yards on 19 carries and one score.

The Falcons run defense has been stout all season but after last week, I'm a little concerned if Stewart is able to get going. The only way the Panthers win this game is if they run for around 200 yards as a team. Let's hope the front four and linebackers force Clausen to beat them, something he's struggled to do against anyone this season.