This week's Madden NFL 11 simulation has the digital version of the Falcons crushing the Seattle Seahawks, 31-7 in Week 15 action. As Jon Robinson describes it, "Falcons continue to look like best team in NFC." 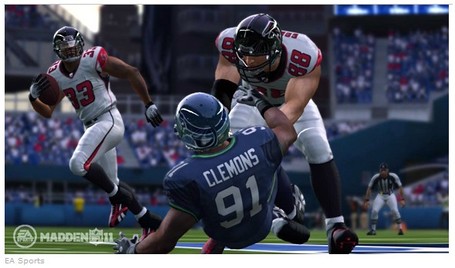 If Seattle wants to win the dreadful NFC West, a win against the Falcons would go a long way to not only improving their record, but also showing that an NFC West team can knock off one of the elite squads in football. Unfortunately for the Seahawks, the Falcons show no signs of slowing down, spanking Seattle 31-7 thanks to big games from Matt Ryan and Michael Turner.

Traveling across the country and playing in a place that earned the reputation as one of the toughest places to play will be no obstacle for the Falcons on Sunday, according to EA Sports. The Falcons jump out to a 10-0 halftime lead and cruise to a 24-point win, their eighth in a row.

Another solid effort is expected from Matt Ryan as his electronic doppelganger throws for 237 yards on 23-of-31 passing and three touchdowns. Turner earned his player of the game honors by rushing for 106 yards and one touchdown on 25 carries. If this sim has any hold on real life, Roddy White can expect to break out of his four-game touchdown drought. He's projected to catch eight passes for 85 yards and two touchdowns at Qwest Field.

On the Seahawks side, there's struggles all around. Matt Hasselbeck completes only 50 percent of his passes and throw two picks. Marshawn Lynch can't get the ground game going and is held to 59 yards on 13 carries but does score Seattle's only points. Finally, amidst all the receiver injuries, the Seahawks are led by Brandon Stokley with fives catches for 58 yards.

Falcons Win 34-18 In Seattle, And Now It's Saints Week