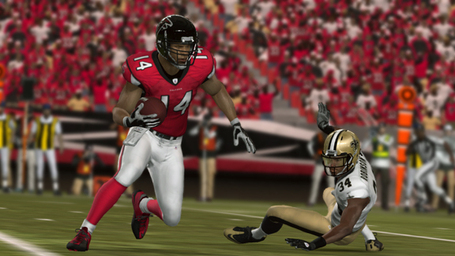 The Atlanta Falcons might be the most under-the-radar 12-2 team in the history of the NFL. Make that 13-2 after this week, as the "Madden" simulation shows the Falcons scoring a late touchdown to take down the defending champs 17-16. Matt Ryan throws for 209 yards and two touchdowns, including the eventual game winner: an 11-yard bullet to "Rowdy" Roddy White.

In the simulation, the Falcons fall behind early and trail 16-3 at halftime behind a Drew Brees to Marques Colston touchdown pass and three Garrett Hartley field goals. Trailing 16-3 on Monday Night Football in the Georgia Dome would be a disaster of epic proportions. In the words of Dr. Peter Venkman it would mean, "Human sacrifice, dogs and cats living together... mass hysteria!"

The Falcons though, as they've done all season, would rise up after halftime. Matt Ryan would throw two touchdown passes along with 209 yards. Michael Turner rushed 23 times for 96 yards and Roddy White backed up his trash talk with eight catches for 82 yards and the game-winning touchdown.

Brees threw for 292 yards but was held to one touchdown and threw one interception. Reggie Bush led the Saints in rushing but managed only 30 yards on seven carries. Colston caught six passes for 72 yards and the Saints only touchdown.