Three weeks ago, the Falcons ran away from the Panthers, 31-10, in Carolina and now they play round two, this time in Atlanta. For the Panthers, this game means nothing as they've locked up the No. 1 pick in next April's draft but for the Falcons it means everything. The No. 1 seed in the NFC and the NFC South division crown. Will the Panthers play spoiler? EA Sports and ESPN via Jon Robinson has the scoop. 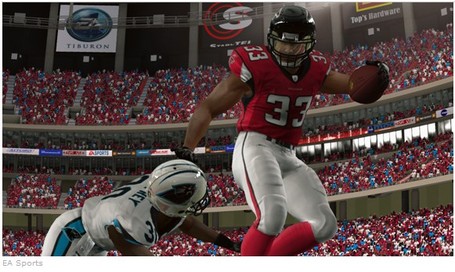 With Carolina locking up the top pick in the 2011 draft, this is Jimmy Clausen's chance to prove to ownership that the team doesn't need another quarterback. Unfortunately for Clausen, he threw three interceptions in the "Madden" simulation and played downright terrible ball, helping Atlanta cruise to the easy 24-6 win.

In the simulation, the Falcons lead 10-3 at the half before dropping 14 third-quarter points to secure their 13th victory of the season. They hold the Panthers out of the end zone while scoring three touchdowns themselves. All in all, a sound beating.

Clausen completed only 57 percent of his passes and throws for only 181 yards and three interceptions. Jonathan Stewart led the Panthers in rushing with 88 yards on 15 carries and Steve Smith caught five passes for 72 yards.

Matt Ryan completed almost 65 percent of his passes for 263 yards and two scores. He did not throw an interception. Turner won player of the game honors with his 135 yards rushing on 23 carries and one touchdown. Roddy White finished his amazing 2010 season with eight catches for 118 yards and one touchdown.