Saints Think It's Week Four Of 1977, Based On Credentials Given To Falcons Media

Share All sharing options for: Saints Think It's Week Four Of 1977, Based On Credentials Given To Falcons Media

This is hands-down the most appalling press pass of all time, for four specific reasons. First, look at the thing.

From Jay Adams DUH IT SAYS JAY ADAMS RIGHT THERE ON IT: 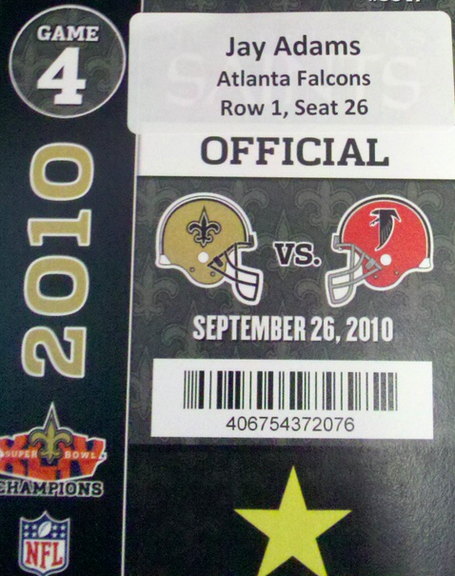 OUTRAGE THE FIRST: The Falcons haven't used that helmet since the '70s. Note the gray face mask. The team changed gray out for white in 1978, then for black in 1984. The whole hat went black in 1990, as its stayed except for throwback games ever since. [Feel-good note: In our 1977 season series with the Saints, we outscored them 55-28. So if that's how yall wanna play it, that works for us.] This is the biggest timeline outrage since it was unveiled the Cowboys still use our 2002 logo on their draft board, meaning it's an even bigger outrage than when Fox showed 2006 footage of the Georgia Dome last week and pretended it was live.

OUTRAGE THE SECOND: That thing above the NFL logo in the bottom-left corner.

OUTRAGE THE THIRD: Everyone knows the road team gets listed first.

OUTRAGE THE LAST: Why does it say "GAME 4?" It's week three, guys. What do you think about that math, Darren Sharper?

And once again all we do is win win win win.less than a minute ago via Twitter for Android

Hey, you did it too! In the song, T-Pain only says three wins there, but you said four. Everyone in New Orleans must think three and four are interchangeable, except Lil Wayne, whose Carter albums have been sequenced properly so far.

Yes, they're counting two preseason home games in there; hush your mouth, it's hate week.