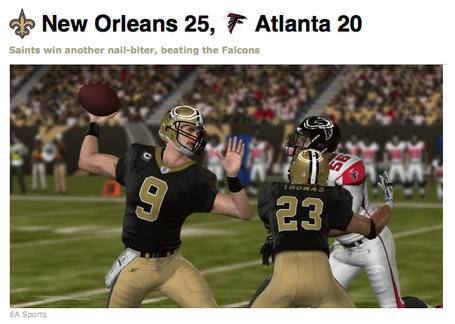 In the above image, Spoon is seconds away from merging Pierre Thomas and Drew Brees into one person. That's the power of No. 56.

In EA Sports latest Madden simulation, the Atlanta Falcons video game doppelgangers come up a little short against the New Orleans Saints. The analysis via ESPN and EA Sports.

Drew Brees threw for 352 yards and two touchdowns as the Saints held on to beat the Falcons, 25-20. Atlanta hung tough with the defending champs, taking the final drive inside the red zone with under two minutes to play, but when Matt Ryan's pass to Roddy White was picked off inside the end zone, the Saints had survived another close call, pushing their record to 3-0.

Player of the Game: Drew Brees

Some problems with the Sim:

It's going to be a close game, no one thinks otherwise, but if the Falcons have the ball in the red zone with under two minutes to play with a chance to take the lead, every Falcon fan in America would take those odds.