For the first time, um, ever, the Falcons have an aggressive, sustainable defense that gets results, thanks to BVG.

Share All sharing options for: Is Brian VanGorder The Best Defensive Coordinator In Atlanta Falcons History?

Brian VanGorder doesn't get a lot of national, or even regional, attention, but that's not going to last much longer if his young Falcons defense continues to improve. Take a look at this chart: 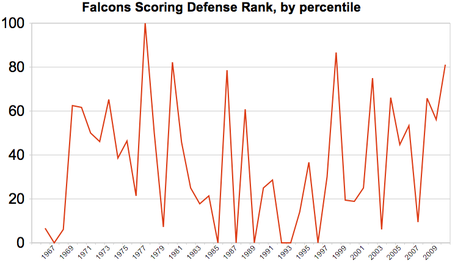 Only 14 times in their history have the Falcons finished in the league's top half in scoring defense*. Yes, we even hit bottom six times in one decade; Jessie Tuggle was credited with hundreds of stops every year because statisticians refused to believe any other Falcons were capable of tackling. Before VanGorder took over the defense in 2008, it managed to finish in the top half in consecutive years only twice: 1969 and 1970, and 1977 and 1978.

Atlanta's defense ranked in the top half in both of VanGorder's first two years. And so far this year, they're sixth in the league. We'll see if that holds, but after holding two Super Bowl-caliber teams (the Steelers and Saints) to 39 total points in a pair of overtime games, they're well on their way to finishing as an above-average defense for the third straight year, something no other Falcons D has ever done. Especially with games against the 49ers, Browns, Rams, Panthers (x2), and Buccaneers (x2) on the way.

And so far this year, 20 of the Falcons' 46 allowed points have come on three plays of 50 yards or more -- those aren't going to happen every week. Another seven points happened after a 72-yard punt return. The Falcons have yet to give up a multiple-first down touchdown drive longer than 50 yards.

Some would point out the Falcons' 1977 defense allowed fewer points per game than any in NFL history, and thus Jerry Glanville must be considered the team's best defensive boss ever. But the '77 team was based around a single miraculous gimmick that couldn't possibly work for more than a couple dozen games, and it didn't. By 1979, the defense was back to the bottom of the pack, as it had been in 1976. Going by either points or yardage allowed, Atlanta's defenses finished in the league's bottom half in three of Glanville's six years as either senior or de facto defensive coordinator.

BVG coached Georgia's defense from 2001 through 2004, their best four-year defensive run since the early '80s. Their excellent 2007 defense is a clear exception, as Georgia's D has otherwise struggled since VanGorder left, finishing as low as 64th in the nation.

From 1994 to 2004, Central Michigan's defense ranked in the nation's top half only once; yes, it was during VanGorder's two-year term as defensive coordinator.

Only two of Atlanta's defensive starters from the past two weeks are over 30 years old: Mike Peterson and John Abraham. And Coy Wire and Erik Coleman are the only other over-30's on the two-deep. Key players like Curtis Lofton, Sean Weatherspoon, Thomas DeCoud, and Kroy Biermann are 25 years old or younger. Before the season, the New York Times ranked Atlanta as having the league's sixth-youngest D.

This is an operation that's built to last. Much of that can be attributed to Thomas Dimitroff's 2008 draft, almost certainly the best draft in Falcons history (don't believe me?), and two other strong drafts, plus Mike Smith's excellent defensive background.

But the defense is VanGorder's responsibility, and Falcons fans should hope it stays his for a long time.

* Yes, scoring defense isn't the world's greatest defensive metric since it punishes defenses for bad special teams and offensive turnovers, but we don't have Opponent-Adjusted DVOA DAVE Yards Per Play Above Replacement Level numbers for 1966, so we take what we can get.