It's odd to have power rankings in the NFL. Every team plays in the same league and a winner is decided on the field. Power rankings serve no purpose. This is not college football where polls are necessary to determine which teams are great and which teams have merely feasted on cupcakes. Still, they are always highly anticipated and I have to admit that I couldn't wait to see where the Falcons were ranked after beating the Saints on Sunday.

With that said, I wanted to join the fray with my own power rankings. But I was faced with a problem. I am a huge Atlanta Falcons fan and there is no way their ranking would not be influenced by this fact. This is where math comes in. If you know my work, you know I'm a stat guy so these power rankings would need to be based on strict numbers to ensure my Falcons-bias would be under control. Follow me through the jump to see the results.

In other words, teams don't get credit for playing hard. It's wins and the level of competition that counts. Very simple and obvious but a lot better than pulling names out of a hat. Through three weeks, the best power ranking a team can have is 45. That's being undefeated with all three wins over 2-1 teams. 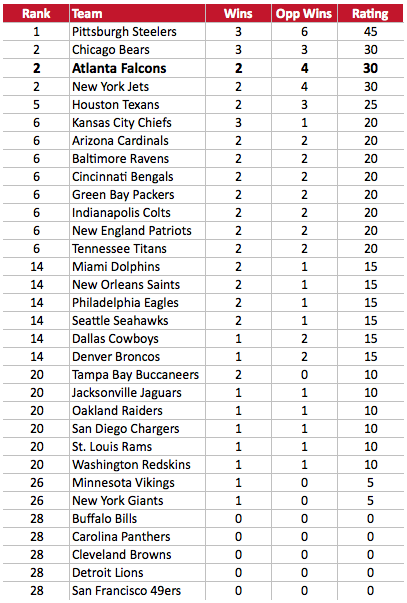 The Falcons' season is looking more and more impressive. They've beaten the Cardinals and Saints (both 2-win teams) and their only loss was to the undefeated Steelers. On the road. In overtime. They find themselves in the second tier of teams with the Bears and Jets. This week's opponent, the 49ers, have yet to win a game so we can expect to add another five points in their power ranking.