PHOTO: Deion Sanders' Surgically Repaired Toe In All Its Glory

Share All sharing options for: PHOTO: Deion Sanders' Surgically Repaired Toe In All Its Glory

Former Atlanta Falcons CB Deion Sanders, a Falcons Ring of Honor member and soon-to-be Hall of Famer, has a really INTERESTING left index toe. I don't know if toes have names that correspond to the names of fingers, but let's roll with it. Prime recently displayed the post-surgery trophy on NFL Network, offering a peek at the alteration from which Sports By Brooks derived a grainy screen cap:

But at last we have an up-close, full-frontal look at Prime Time's periscope toe via a session at KTCK radio in Dallas [Not Safe For People Who Cannot Appreciate INTERESTING Toes]: 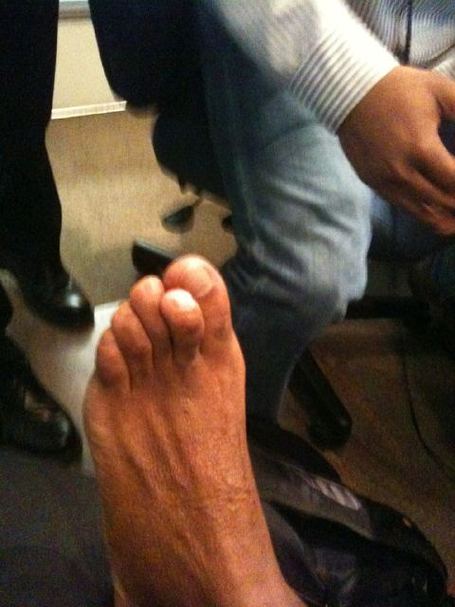 The surgery to repair that toe almost a decade ago lasted three hours, producing a body mod masterpiece that's sure to catch on among Sanders' many pupils throughout the NFL. As it belonged to one of the fastest players in football history, it's entirely possible that toe would've melted off at some point anyway.

Hey, Matt Ryan had turf toe -- maybe he'd like to give this look a shot?