Share All sharing options for: Box Score Wonders And Curiosities In The Atlanta Falcons 30-28 Victory Over The Seattle Seahawks 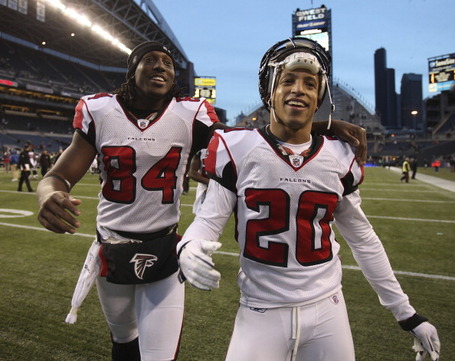 As the Atlanta Falcons successfully held off the Seattle Seahawks 30-28 at CenturyLink Field this past Sunday, it was hard to overlook a few fascinating subplots that have arisen with the Falcons after just four weeks:

As Caleb Rutherford of The Falcoholic points out Roddy White, the most targeted (last year) and one of the most reliable receivers in the NFL, is in the dumps of the league in drops this year. This trend continued as rookie standout Julio Jones had an impressive game with 11 catches and 127 yards (17 targets) while Roddy had just 6 catches and 78 yards (11 targets) for the night. Roddy is second in the NFL with 45 targets, Julio is eighth in the NFL with 38 targets.

Record-setting Julio?: In four weeks, Julio Jones has amassed 24 catches and 342 yards. Projecting over 16 games, that would put him at 96 catches and 1368 yards. Jones projections are 5 catches away from Anquan Boldin's rookie record with 101 catches in a season, back in 2003 and 105 yards behind the rookie record for yards in a season with 1473 yards by Bill Groman in 1960.

California Love: In the five games Falcons' head coach Mike Smith has managed since his arrival, Atlanta is 5-0.

Passing the bird: Tarvaris Jackson's 319 passing yards was a season high given up by the Falcons' defense, making Atlanta the 24th-ranked passing defense in the NFL