The Atlanta Falcons are planning to one-up the Iowa Hawkeyes, or maybe 643-up, since that's how much bigger the Georgia Dome is than Kinnick Stadium. But this isn't a contest. We're all God-fearing patriots here.

Here's a look at the card stunt the Birds aim to unveil at halftime of the game against the New Orleans Saints, a football team you'll note isn't doing any patriotic card stunts this weekend: 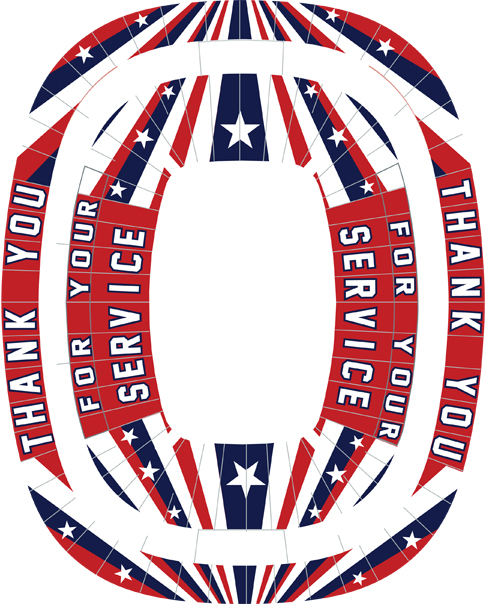 Veterans Day will come and go before the Falcons hit the field Sunday against the New Orleans Saints, but there are plenty of big plans to honor US military veterans during the Falcons' military appreciation game.

Perhaps the biggest plan of all involves all 72,000 fans in attendance.

During halftime, the Falcons are asking all fans to please remain in their seats for a halftime ceremony honoring World War II veterans during which fans will have the opportunity to hold up a card assigned to their particular seat to create a massive image.

Known as a "card stunt," the image below shows what the Georgia Dome seats will look like when the card stunt is performed at halftime, and the Falcons need as many people as possible in their seats during halftime to make it look great.

As fans arrive at their seats Sunday, they'll notice cards taped their seat back. All cards are seat-specific, so please don't exchange cards with other fans around you.

During halftime, several WWII veterans will be honored and at the front of each section inside the Dome will be a person who will cue the section to hold up their cards at the appropriate time.

Falcons Vs. Saints: Fortune Frowns Upon The Bold, 26-23