Share All sharing options for: Super Bowl 2011 Weather In Dallas Calls To Mind 2000 In Atlanta 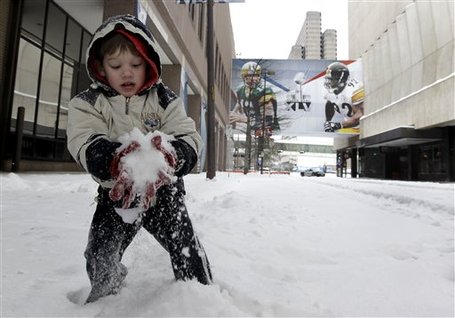 Yeah, it's been snowing in Dallas all throughout Super Bowl XLV week, though temperatures are forecasted to rise above freezing for tomorrow and game day. Jerry Jones' thunder is being stolen, Peter King needs a hug, and the media is terrified of covering a Super Bowl in New York City.

Meanwhile, Atlanta would like an apology for everything you said about Super Bowl XXXIV, please 'n' thanks.

The Super Bowl in 2000, a classic at the Georgia Dome between the Tennessee Titans and St. Louis Rams, was marred by an ice storm. While ice storms strike all sorts of places at all sorts of moments, for some reason this one stuck in the minds of many as being Atlanta's fault. Or something. Since that game every Super Bowl has been played either indoors or in Florida, southern California, Texas, or Arizona.

Arthur Blank's latest Super Bowl sorta-bid was shot down by Roger Goodell, who made it clear the city needs a new stadium first. But as we're seeing this week, no amount of money is going to keep the skies clear. <--- (You did not need a blogger to tell you that.)

Plans For An Open-Air Falcons Stadium Causing Debate In Atlanta