My favorite Super Bowl XLV commercial (go here for a breakdown and video of all the best ones, by the way) was the NFL's reimagining of classic TV characters as football fans. It may have been my favorite since I spent almost the entire game typing, but I'm pretty sure it was good either way.

In case you missed the Atlanta Falcons flag proudly flying from the back of the General Lee, here's a screen cap: 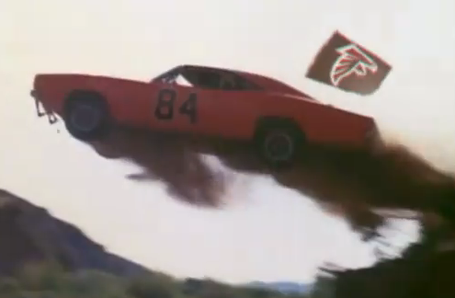 I guess that's a nice idea. Not sure which part of the state Hazzard County was supposed to have been in, but it's always refreshing to remember the NFL is aware of its Georgia franchise, even if it is discomforting to know there's a rebel flag right next to that Falcons logo.

This ad was nowhere near as Georgia as that Yellawood commercial, because of course nothing can be, though I do feel it's overtaken the one with T.I. in overall Georgianess.