Share All sharing options for: PHOTO: Aaron Rodgers Gets A Real Title Belt From Clay Matthews After Super Bowl Win 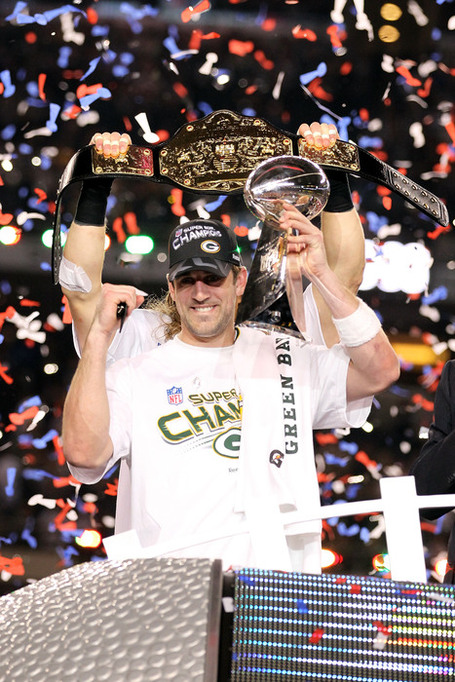 Just as we at SB Nation Atlanta take it upon ourselves to write up anything about rap music in sports, whether it's Atlanta rap music or not, we also feel qualified to handle all sports stories somehow involving professional wrestling. Again, because this is SB Nation Atlanta.

Green Bay Packers QB Aaron Rodgers, known for his invisible championship belt touchdown celebration (the one that John Abraham perhaps unwisely mimicked during the NFC Divisional Round), finally got awarded a real belt from LB Clay Matthews as the team celebrated its Super Bowl XLV win over the Pittsburgh Steelers.

Matthews himself is just about the most pro wrestly-lookin' brother in all of sports right now, save perhaps his position coach Kevin Greene. In this arrangement I see Rodgers being the manager who accidentally starts up trouble with a really big guy, then Matthews comes running in to beat up that guy, then a pregnant ventriloquist is revealed to be a Vince McMahon-lookalike's long-lost grandfather from hell whose first order of business is to challenge an elderly woman to a dance contest.

Yes, it's unfortunate that Matthews and Rodgers will be forced to carry out their wrestling career in late 1990s WCW, but they just won a Super Bowl so they'll probably stick with football anyway.