Share All sharing options for: Justin Houston Is Most Popular Pick For Atlanta Falcons Among Mock Drafts

It's possible the NFL won't play a season this year but the NFL Draft will take place and right now that's all that's keeping me sane. With just over a month to go before the three-day primetime event, there is a lot of speculation on which players will end up with what teams. The Atlanta Falcons are no different with widely varying opinions on players, positions and just what exactly is considered a need. The lack of free agency adds a new wrinkle to the draft-planning strategy.

In an effort to clarify this confusing situation, I dug through 60 of the top mock drafts posted in the last week. Yes, 60 of them. What? I had some spare time. Using such a massive amount of data, we can really start to see patterns develop. And with a hat tip to Jay Adams at AF.com, I created a word cloud to let us OOH and AHH at the pretty picture before diving into the hard data. First up is the position breakdown. 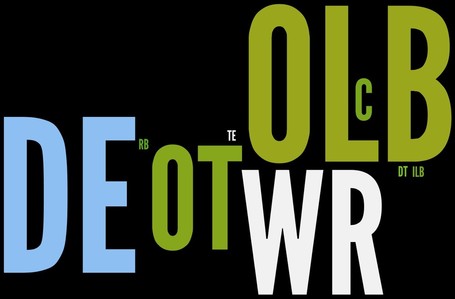 This makes it very clear that most experts believe the Falcons biggest need is defensive end and/or outside linebacker. Just to clarify, the positions used were from Scouts, Inc. meaning Justin Houston was categorized as a DE though he is listed as DE/OLB in most places. The other obvious needs are wide receiver and offensive tackle. Everything else appears to be inconsequential. Here's the raw numbers. *Note: Number is the number of times that position was selected.

Next up is the most popular players the Falcons are targeting. Again using the same data from the 60 mock drafts over the past week. Behold!

We can see a clear favorite has emerged from the pack; Georgia's Justin Houston. Iowa's Adrian Clayborn is close behind with Jonathan Baldwin and Torrey Smith as the top wide receiver candidates. The full data beckons below. *Note: Number is the number of times that player was selected.

Preparing to see Justin Houston in a Falcons jersey is probably a safe bet. Last year at this time, the wisdom of crowds said Sean Weatherspoon was the pick and the Falcons didn't waver. Will it happen again? My guess is the Georgia Dome will be seeing a lot of jerseys with Houston on the back in 2011. Or 2012. Or whenever they play football again.