Share All sharing options for: Madden 12 Cover Voting Bracket Rigged For Aaron Rodgers, But Matt Ryan's A No. 2 Seed 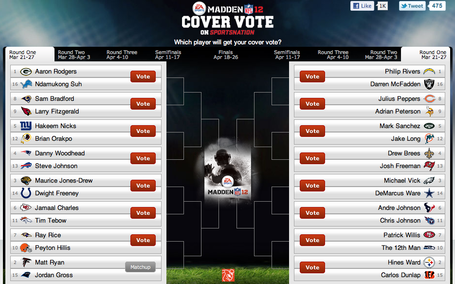 Click above to biggify the voting bracket being used to determine which player will take the Madden 12 cover, or click here to go look at the actual thing. You'll note Packers QB Aaron Rodgers and Chargers QB Philip Rivers are your No. 1 seeds, with Falcons QB Matt Ryan and former Georgia Bulldogs WR Hines Ward the No. 2s.

You'll also note the Seahawks do not have any NFL players listed. This is a little bit of sly humor on the part of the selection committee, as no other NFL teams have NFL players at the moment either.

It's clearly set up for Rodgers to run wild all the way through, as he's the obvious choice anyway. EA is playing off the public's March Madness bracket fever, which is probably smart, but come on. Note Tom Brady and Peyton Manning are sitting for the Pats and Colts, with Danny Woodhead and Dwight Freeney taking their places.

The Super Bowl MVP's only real competition, Michael Vick, will probably be beaten by Drew Brees on the other side of the bracket, and there's no way the public or EA will allow a two-time winner, so Rodgers it is. And Vick's also already been on it too. Hooray, democracy!