Share All sharing options for: Atlanta Falcons, Georgia State Football Scheduled To Be In Same Place At Same Time

The Atlanta Falcons and Georgia State Panthers have often been confused for each other, and some have speculated that they may be the same team. Conspiracy theorists will be interested to learn both the Falcons and Cats have claimed the Georgia Dome for the evening of Thursday, Sept. 1, which could mean they'll play each other!

Or maybe Bill Curry's team will play Clark Atlanta around 3 pm ET or so, when all his players are in class, as the Falcons are scheduled to play the Baltimore Ravens at 7:30 pm ET on CBS.

No big deal -- just have the FCS team slide over to Friday night, right? They're playing another Atlanta team, so it's not like anybody would need to cancel plane tickets over this.

But here's the thing: Georgia State has decided to make Thursday night in Atlanta their thing, having played their first-ever game on a Thor's day last year, their spring game on April 14, and so forth. So forcing the school to give up its cherished tradition not even 365 days after it was initiated might look like a bully move. Do you really want to pick on this kind man just to play a game that will remind everybody of Michael Vick's 2003 injury anyway: 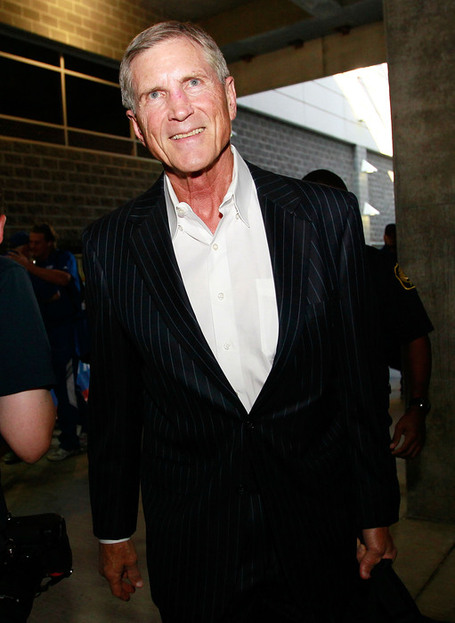 The NFL's schedule page disagrees with AtlantaFalcons.com and lists the Falcons-Ravens game date as TBA, so maybe it actually ends up on Friday anyway. Oh, wait; the NFL will still have a lockout going at the time. Problem solved!

We have more on Falcons scheduling and general NFL scheduling. Falcons fans should join The Falcoholic, and Georgia State fans should visit SB Nation's Panthers hub.