That tinfoil hat won't be necessary this season, Falcons fan and sports conspiracy enthusiast: The NFL has offered up a stunning amount of chances for the defending NFC South Champion Atlanta Falcons to prove they're either the fluke Trent Dilfer, Peter King and company have assumed, or the next out-of-the-ashes Indianapolis Colts- or (don't gag, don't gag, don't gag) New Orleans Saints-type franchise.

The NFL seems ready to love the Falcons for the first time in modern history, offering up a 2011 slate front-loaded with marquee opponents and prime time positioning. It's as if the league is ready to take the training wheels off of Thomas Dimitroff's baby, but still mindful of the inconsistency and Falcons-brand embarrassment-flavored dumpster fires of years past.

Therefore the following top five wasn't compiled with just wins and losses in mind - if the Falcons are 4-5 through the first half of the year, they could still easily finish 10-6 (the run between Saints games is nothing but fluffy football nougat), yet still be ignored and second guessed as a legitimate winning franchise - but the hunt for elusive national prestige.

It’s the first road conference game (Atlanta was 3-0 at divisional rivals in 2010), and the Falcons can’t win the NFC South again without stunting Tampa’s playoff growth – even though they’re kinda/sorta already wearing those size britches. Sure, Seattle earned their stripes by thumping the Saints...

...after "clinching" the NFC West with a 7-9 record, but when you’re handicapping 2011, the Bucs’ 10-6 finish in a superior division make them more of a ‘10 playoff team than the Seahawks.

The Bucs seemed to show rebuilding progress by the week, especially in two squeaker losses to Atlanta. If there’s such a thing as retrospective foreboding, the Birds’ desperate 28-24 comeback at Raymond James in December showed Falcon weaknesses that would be exposed by the Saints and Packers.

If you bristle at the national consensus to dismiss Atlanta’s 13 wins as an aberration, consider the Bears – they won their division and a home playoff game and had the conference’s second-best record (11-5, behind the Falcons), but were written off in much the same manner. You say "Cutler injury controversy," I say "That’s what happens when the national media’s consensus preseason title pick is the sixth seed."

If you believe Atlanta can finish with 10-plus wins in 2011, you almost have to consider the Bears are capable of the same. That’s not the most airtight logic, but it’s hard to argue that this game won’t come back to haunt the loser come January. The Falcons will complete their 2011 rotation with the NFC North without a true cold-weather road game, and a win here could keep them from having to win in hellish the South Canadian winter of Chicago (or Green Bay) five months later.

Of the five games listed here, this might be the one the Falcons don’t absolutely have to win – they just have to not lose it horrifically. Dropping a home playoff game to the eventual Super Bowl winners wasn’t such a detriment to critics; it was the way Atlanta seemed to implode (fancy-speak for the oft-used "choke") in every phase.

The difference between Atlanta being framed as a returning young power looking to break through – say for instance, the hype around the Jets a year ago – and a fluke of lucky scheduling – the ’08 Panthers, the ’03 Chiefs – were roughly 17 points. If the Packers win that divisional round game 31-21, the nation thinks Atlanta is a piece or two from becoming a perennial power, and they remember that the Falcons did beat Green Bay in November. Come on, honestly: Do you remember that happening? 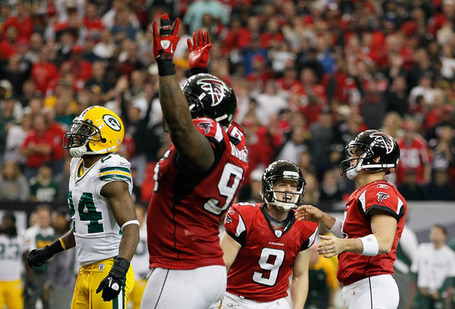 Of course both Saints games are equally important, but as far as image is concerned, the grander of the two stages wins out – and so does the Cajun Horde. New Orleans is 8-2 vs. Atlanta over the last five seasons, but also 4-0 on Monday nights. With a lesser magnitude, the Falcons early season win and primetime home loss to the Saints mirrored the Packers split.

Fun fact: This once woeful rivalry of Dixie doormats has been selected for MNF five of the last six seasons – and that’s after never being picked for almost forty years. Hey there, I-10, let’s momentarily lay down Internet arms and join hands to celebrate the national recognition of our great and storied competition!

Annnnnd, OK: You may resume stabbing each another.

Nothing, not even twice handling the loathed Saints and their world title, could come close to the benefit of finally beating the Eagles on this particular night, with this particular storyline. If we’re convinced the national media has forgotten Atlanta’s steady ascension, rest assured the league hasn’t: Everything about this game is an audition for the Falcons to shed years of embarrassment and inconsistency and join the next decade of premier NFL franchises.

Hey - it’s just the chance to vanquish the ills of a misdirected decade spent wrangling one of the most controversial names in sports history, and the chance to forever change the course of citywide unity behind your pro football franchise, as well as a hopeful advance in the state’s racial divide.