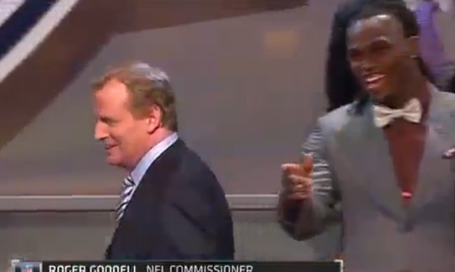 Before the 2011 NFL Draft, commissioner Roger Goodell brought out the many Auburn Tigers and Alabama Crimson Tide players expected to go in the first round, plus Nick Saban and Gene Chizik, for a moment of silence in remembrance of those devastated by Alabama's mid-week tornado mayhem. The crowd had no time for that, of course, instead insisting on booing Goodell for the ongoing (I guess?) NFL lockout:

Transcript of his attempt to calm the mob via, well, SB Nation:

Far be it from redneck Northeasterners to keep quiet during a moment of silence dedicated to Southeastern people, though the entire arrangement was likely thrown together to try and keep the crowd from booing Goodell to begin with. Julio Jones' reaction is the only sane move possible. Just point and laugh at everyone involved.

The second round of the 2011 NFL Draft starts at 6 p.m. (ET) on Friday, April 29, and SB Nation has everything you need to keep up with it: news, rumors, player profiles, scouting reports, the full NFL draft schedule, NFL mock drafts, draft projections and more. Check it all out at SB Nation's NFL Draft hub and our NFL Draft blog Mocking the Draft. For more Atlanta Falcons draft discussion, join The Falcoholic.