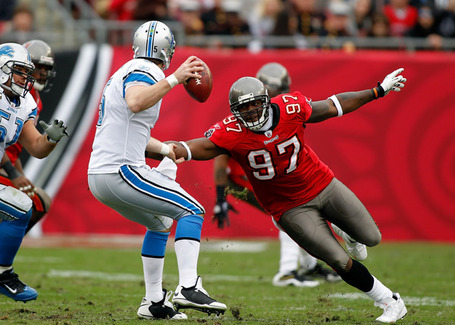 Tampa Bay Buccaneers DE Alex Magee was charged for marijuana possession and an expired tag Monday, according to Bright House Sports Network's Victoria Lim. While every Sunshine State football team will enjoy multiple weed charges every offseason as a matter of course, any legal incidents for the Bucs will be magnified by the ongoing Aqib Talib situation.

Based on the latest news, Bucs coach Raheem Morris still hasn't decided what to do with Talib, who was arrested in April in connection with a Texas shooting for which the DB says his mother was responsible.

The Bucs traded the Kansas City Chiefs for Purdue Boilermakers product Magee in the 2010 offseason. He played in eight games, securing a pair of sacks and a handful of tackles. Tampa just drafted Adrian Clayborn and Da'Quan Bowers at Magee's position, so his playing time could be taking a hit anyway. Taking a hit!

For more on the Bucs, join Bucs Nation.