PHOTO: Matt Ryan, Julio Jones Could Be A Dynamic Duo In the Making

Share All sharing options for: PHOTO: Matt Ryan, Julio Jones Could Be A Dynamic Duo In the Making 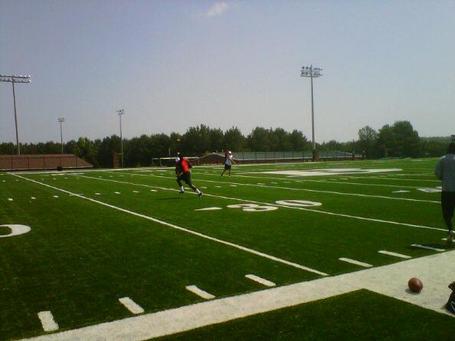 The Falcons, who are continuing with their unofficial practices at Buford High School this week, have been hard at work, and none more so than Matt Ryan. Wednesday, via Buck Langford's twitter page, Ryan was seen throwing with first round draft pick Julio Jones, getting in some valuable repetitions with his newest receiver. It was also reported that Ryan had been quizzing Jones on the Falcons playbook, which he was given immediately after being drafted in April.

When he first started practicing with the team, Jones claimed that several plays in the Falcons playbook were similar to ones run by the Alabama offense, with only a difference in terminology. It's certainly heartening to see Ryan making sure that Jones is keeping up with everyone else on the offense.

So far this offseason Matty Ice has essentially assumed a coach's role, often times directing practice and making sure everyone is on the same page. But with some lofty expectations laid out in front of him, Jones will need to make a major impact in 2011, and his success begins with becoming acquainted with his quarterback.

For more on the Falcons, join The Falcoholic.