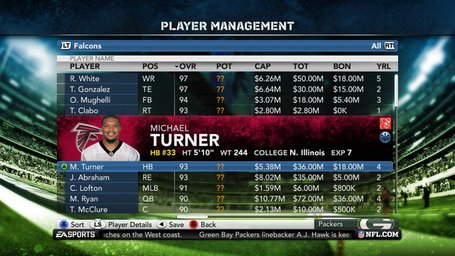 Based on what we can see, the only players rated more highly than Roddy White and Tony Gonzalez are Aaron Rodgers and presumably Drew Brees. Peyton Manning and others probably will be too, but we only have a little to work with here. That's a good number for White, but Gonzalez' looks a bit too high.

Nice to see Todd McClure still getting recognition, along with Pro Bowler Ovie Mughelli and my favorite player from the 2005-2007 Falcons, Tyson Clabo. There will be much squawking in Birdland about Matt Ryan's rating, but I think it's pretty solid.