In addition to numerical player ratings, Madden 12 includes sets of traits for each player that aim to bring a little real-life personality into the game. Pasta Padre has a huge collection featuring player traits from every team, but here's a look at how Matt Ryan will handle in the game. We already know his overall rating is a 90, but he'll likely be one of the best sub-95 players in the game based on these: 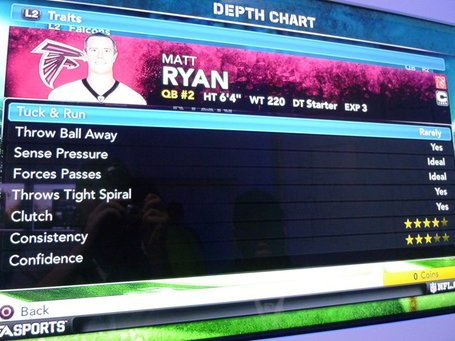 That clutch trait has stirred up a little controversy among sports fans who only watched one Atlanta Falcons game all last year -- the playoff loss against the Green Bay Packers. Throughout the rest of the season, though, Ryan led the Falcons on game-winning drives against the 49ers, Saints, Ravens and quite a few others, and his crunch-time stats placed him among the best in the NFL.

The rest of his traits are similar to those of Peyton Manning, Tom Brady and Drew Brees -- his consistency is one star behind Manning and Brady and on par with Brees.