That same Pasta Padre album packed with Madden 12 player profiles? It has provided us the details on another Atlanta Falcons player, this time RB Michael Turner. We already know Turner is rated a 93 overall and will presumably be a straight-ahead power back with no hands and good top speed, but here's a look at how he'll handle in the game: 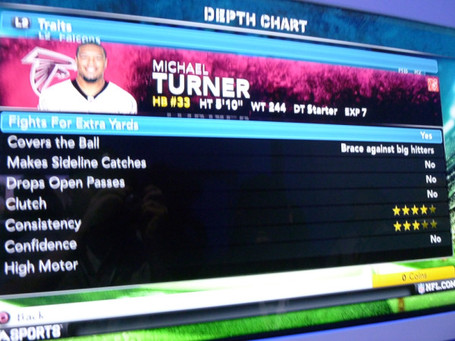 Looks pretty solid to me, though if I were in charge I'd up his fumble-bracedness (what a weird rating!) and ding his consistency a star or two. Turner very, very rarely turns the ball over, but his yardage fluctuates from game to game quite a bit. Atlanta's offensive linemen might be given low consistency traits in the game, but I'd think it would make more sense to apply some of that to Turner himself.

Interested in learning how that high motor trait affects things.