Pasta Padre's landmark set of Madden 12 player traits includes four Atlanta Falcons players, with Roddy White now added to the collection. I think the menagerie is finished being added to, so this will have to do us for the time being. White's overall rating is a 97, the team's highest and likely one of the highest five or so receivers in the game. Combine that with these traits, and he'll likely be one of the game's best weapons: 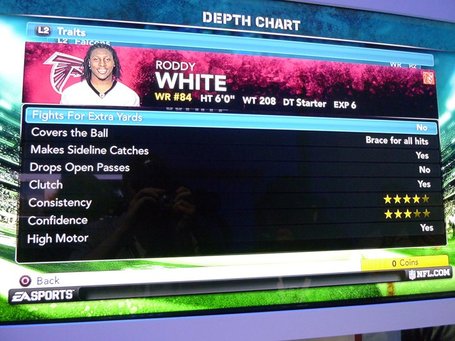 Just about a perfect set of traits, other than that one star shy of really super consistent consistency. I don't know if fighting for extra yards is really all that desirable for wide receivers anyway. His clutchness tag is highly deserved, as was Matt Ryan's -- we're talking about a player who caught a game-winning touchdown against the Ravens and forced a game-saving fumble agains the 49ers.

The latter play alone could've earned him a high motor distinction, too. For longtime Falcons fans, how nice is it to see Roddy marked as a player who doesn't drop open passes?