So Reggie Bush was reportedly traded to the Miami Dolphins. This is a way bigger deal than it should be, because Reggie Bush is really famous. Donovan McNabb and Albert Haynesworth were also traded -- both of those players are really famous.

Since Bush reportedly agreed to the trade, you couldn't help but wonder how New Orleans Saints fans would react. I'm sure most are just fine with the news, but at least one has not taken it all that well. (And, yes, there are plenty of Saints fans calling out the artist for overreacting.)

Here's a whole gallery worth of carnage. Via @Poppa_Falcon, avid researcher of Saints message boards: 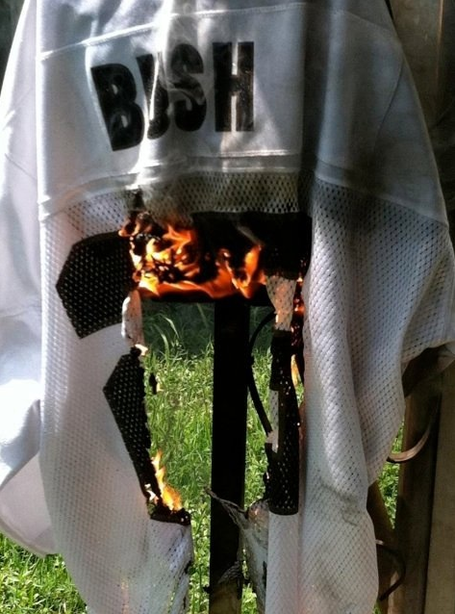 I have mixed feelings about Bush leaving the NFC South. Seeing him take handoffs always made me exhale in relief, since it meant Drew Brees wouldn't be passing for one more play. But he was a terrifying punt returner. The Saints offense is as loaded as ever without him, but it's definitely different.

NFL Free Agency: Jason Snelling Ends Up Back In Atlanta For One More Year