Via Pasta Padre's collection of screens from Madden 12 of players who've joined new teams, here are a pair of locally relevant digital re-skinnings. First, DE Ray Edwards makes his way to the E-Falcons by way of the video Vikings, and is shown here slipping past James Lee of the Buccaneers: 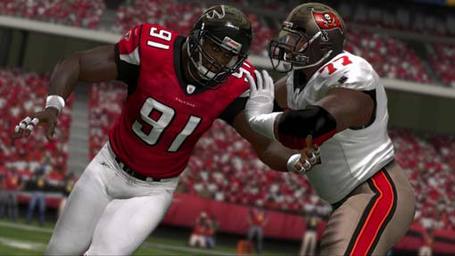 Look at all those character issues! Next up we have incoming New Orleans Saints power back Darren Sproles trampling poor Brent Grimes with his mighty running power: 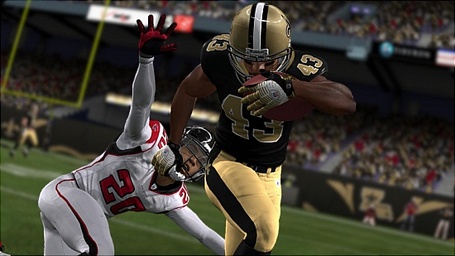 EA Sports has discovered Grimes' primary weakness. While he's a Pro Bowler who regularly punches well above his weight, he's incapable of stopping players who are smaller than he is. While Drew Brees skips to the sideline in the background, Sproles overwhelms Grimes with a shattering, head-down charge. You've discovered Atlanta's greatest weakness, New Orleans, but just wait until the Falcons counter by sending out Jacquizz Rodgers.