Aw, hell. For some reason Peter King went and picked the Atlanta Falcons to win the Super Bowl over the San Diego Chargers, and now ... aw, hell. King has the Birds finishing 10-6, good enough for a wild card in the NFC, and then beating the St. Louis Rams, Green Bay Packers and New Orleans Saints before meeting the Bolts.

Curtis Lofton also makes one of six regional covers, presumably the Southeastern one, though you can never be too sure: 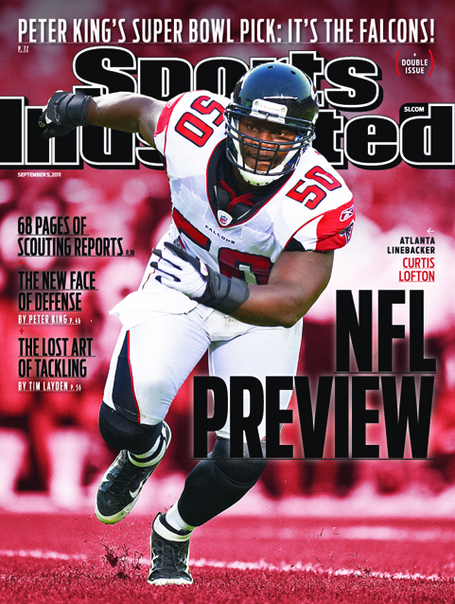 King picked the Super Bowl's results correctly from afar last year, so we can hope with all our might that he does it again this year. But what are the odds of one guy picking two straight Super Bowls? Gotta be pretty good, I'd say! Starting to feel great about this pick! Bring on San Diego!

This is the first time the Falcons have been on the SI cover since last year's preview thingie. The last non-preview cover was one or another Michael Vick incident, and the last before that was Deion Sanders, if I remember correctly. Not looking any of that up, since I'm booking my flight now to San Diego to scout the AFC Championship Game.