You'd be kind of stunned if Deion Sanders didn't show up to the 2011 Pro Football Hall of Fame enshrinement ceremony wearing anything short of these custom gold Under Armour shoes: 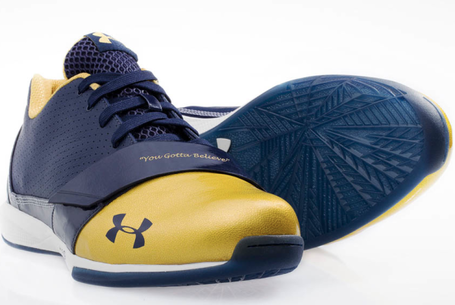 Gold shoes sort of match the gold jacket each inductee is given according to custom. That "You Gotta Believe" tag has been a Sanders thing since very early in his Atlanta career -- in his Atlanta Falcons days, he used to wear black-and-white 'do rags that similarly urged your belief.

Gold's also a Florida State color. Maybe there's something to that. If he'd worn red socks in honor of Ed Sabol, as broadcasting associate Rich Eisen did, he could've had FSU colors all the way down his leg. Football is weird almost all the time.