Deion Sanders brought Snoop Dogg, Ice Cube and Nelly to attend his Pro Football Hall of Fame enshrinement speech, and not just for the sheer Deionness of seeing Ice Cube thanked in the same speech as T.D. Jakes and Chan Gailey. All three rappers attended an after-party in honor of Prime.

At some point Deion and Snoop performed a song apparently titled "Hall of Fame Swagger," which you can hear right here, via @ConSchwartz. And via @QrazyQarl, here's a photo of the two on stage: 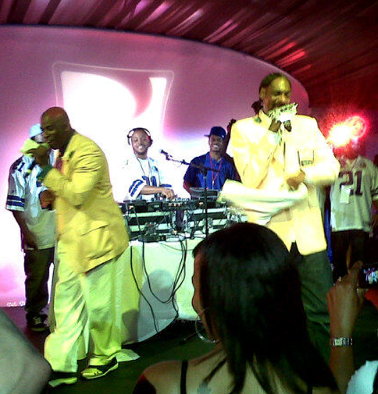 Witness Snoop's replica Hall of Fame jacket in action -- it even reportedly had a No. 21 on the back.

Sanders' verse opens with the lyric "1989, ATL" before listing his Braves and Falcons achievements, so we can overlook that Kingdom Come old-man-punched-in-the-stomach whisper flow. It may be the best rap song Deion Sanders has ever made. Decide for yourself how big of a compliment that is.

Everything about this makes more sense than everything else you've already encountered this morning. I love Deion Sanders.